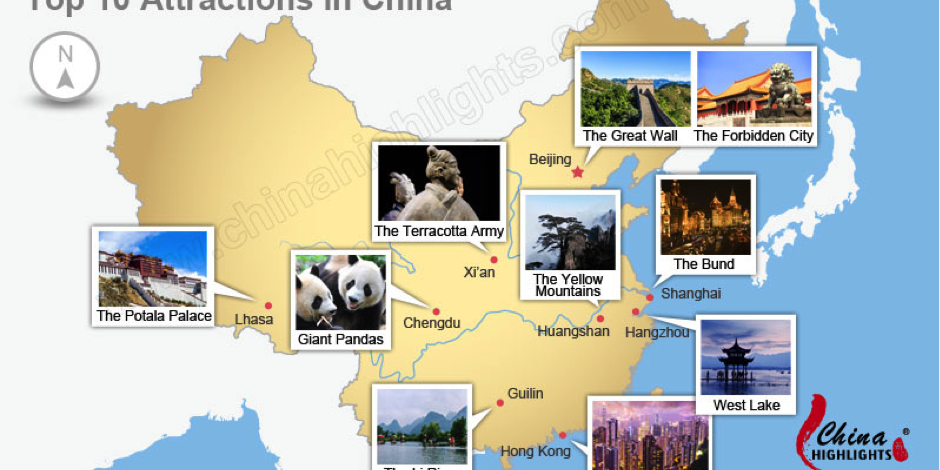 With a vast territory and a long history, China offers so much to see and explore. China Highlights has listed for you the top 10 attractions or must-visit attractions in China.

One of the iconic symbols of China, the Great Wall is the longest wall in the world, an awe-inspiring feat of ancient defensive architecture. Its winding path over rugged country and steep mountains takes in some great scenery. It deserves its place among “the New Seven Wonders of the World” and the UNESCO World Heritage Sites in China.

The wall spans from China’s western frontier to the east coast, totaling around 5,000 km (3,100 miles), but the most integrated and best preserved sections are close to Beijing. So this is what people usually mean when mentioning the Great Wall of China.

The Terracotta Army in Xi’an — Emperor Qin’s Buried Battalions
The Terracotta Army has laid underground for more than 2,000 years. However, in 1974, farmers digging a well uncovered one of the greatest archaeological sites in the world. In 1987 it became World Cultural Heritage.

It is significant because the hundreds of detailed life-size models represent the army that triumphed over all other Chinese armies in the Warring States Period (475–221 BC), and who were the decisive factor in forming a united China. It raises interesting questions about why it was made, which await your consideration when you come face-to-face with soldiers of the past.

The Forbidden City in Beijing — Imperial Palace for 24 Emperors
It was once a “palace city” where ordinary people were forbidden entry. An extravagant demonstration of ancient Chinese architecture, over 8,000 rooms with golden roofs are elegantly designed and painted in red and yellow.

The Forbidden City was the imperial palace of the Ming and Qing Dynasties for 560 years till 1911. 24 emperors lived there. World Cultural Heritage, and now known as ‘the Palace Museum’ among Chinese, it is a treasure house of Chinese cultural and historical relics.

It is recognized as one of the five most important palaces in the world (with the Palace of Versailles in France, Buckingham Palace in the UK, the White House in the US, and the Kremlin in Russia).

The Li River in Guilin — Watery Wonder
The karst landscape along the Li River has captured the heart of artists. Generations of Chinese painters and poets have been inspired by the beauty of nature there, using their pens and brushes to capture the breath-taking natural scenery.

Nowadays it’s a popular photography destination. When Chinese travelers seek a place for natural beauty, they first think of Li River and Yangshuo.

The 83-kilometer-long section of the Li River between Guilin and Yangshuo is the most beautiful. The river landscape is decorated with startling hills, steep cliffs, and farming villages, and is lined with bamboo groves.

The Li River was listed as one of the “World’s Top Ten Watery Wonders” by America’s National Geographic Magazine. Several world famous figures have visited the Li River, including former US Presidents Bill Clinton and George Bush (senior), and Bill Gates.

Jiuzhaigou in west China’s Sichuan Province is famous for its multicolored lakes and fall foliage; Zhangjiajie National Forest Park is well-known for its grotesque rock pillars. If you are looking for world-class scenery, consider going to all of them.

Giant Pandas in Chengdu — “National Treasure” of China
The giant panda is not only deeply loved by the Chinese, but by many foreigners too, and not just children. Although there are many zoos in China and elsewhere, where you can see a giant panda, the best place to see them is Chengdu — the giant panda’s “hometown”.

There are three places you can see pandas close up: Chengdu Panda Breeding and Research Center, Dujiangyan Panda Valley, and Bifengxia Panda Base.

Chengdu Panda Center is in the north of the city, and is more established. Bifengxia Panda Base is 2 hours from Chengdu, has more pandas, and you can see pandas more in their natural habitat. You can get even closer to the pandas by taking a volunteer program in Bifengxia or Dujiangyan Panda Valley, an hour outside Chengdu.

The Potala Palace in Lhasa — Symbol of Tibet
The Potala Palace is a symbol of Tibet. In 1994 it was declared a UNESCO World Cultural Heritage Site. It is a huge treasure house of materials and articles from Tibetan history, religion, culture and art. The palace is widely known for the precious sculptures, murals, scriptures, Buddhist statues, murals, antiques, and religious jewelry housed within.

The Bund in Shanghai — International Architecture
The Bund is one of the most recognizable architectural symbols of Shanghai. It showcases the world with its colonial European buildings and skyscrapers the other side of the Huangpu, housing one of the world’s foremost business districts.

The Bund was Shanghai’s most prosperous area in late 18th century and early 19th century. When the first British company opened an office at the Bund in 1846, it became the epitome of elegance.

Victoria Harbor in Hong Kong — Best Spot for Bird’s Eye View
The view over Victoria Harbour from Victoria Peak is to Hong Kong as climbing the Great Wall is to China; it offers the iconic outlook over Hong Kong’s “high rise” to success and prosperity.

Victoria Peak is the best spot to have a bird’s eye view of Hong Kong. Viewed from the peak, both day and night scenes are worth taking in. See high-rise buildings round the busy Victoria Harbour stretching out towards Mainland China. At night the scenery is gorgeous, when the Symphony of Lights of various buildings dances in unison.

West Lake in Hangzhou — Paradise on Earth
Hangzhou is renowned as China’s “paradise on earth” owing to its beautifully crafted landscape. West Lake was created after the Chinese love for garden-style parks for recreation. West Lake is a place of tranquility where urbanity becomes a silhouette on the northeast horizon and mountains near and far surround it on the other three sides. The occasional pagoda and Chinese-style arched bridge add atmosphere to the tree-lined walkways, verdant islands, and hills.

Category: TravelBy WIC TeamFebruary 9, 2017
Tags: articlebloglifethemethemeforest
Share This Article
Share with FacebookShare with TwitterShare with Google+Share with PinterestShare with LinkedIn